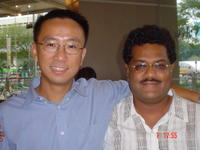 Almost twenty years ago, I spent six months in Sabah before going to uni. In that time I tried everything under the sun. I even got a job at a property development company. After about two months I was either still bored or wanted more challenge. So I tried church, which was the traditional church mom was going to. This was the same church she made us go to when we were young.

I had never been to a small group and out of curiosity decided to check it out. It turned out to be the youth group (there was no young adult group). There I got to know a young pastor by the name of John William. He was well educated and enthusiastic about Christ. This was the first time I had close contact with a spiritual leader. His joy and commitment in serving made an impression. So I thought to myself, "If and when I ever serve, it will be wholeheartedly and with joy."

When I left for Perth, he gave me a book 'Spiritual Leadership' by Oswald Sanders. This must have been the first book I read on leadership. Some months after I left he moved to London and we lost touch.

Early this year he met my younger brother. So out of the blue I got this email from him. He kept saying how surprised he was to hear from my brother that I was serving as a pastor. He never imagined me as a pastor - that makes two of us.

He came into town on Monday and dropped by the office yesterday. We caught up and my wife and kids joined us for dinner. My wife even took a photo of us together. Over dinner John kept telling Dinah how thrilled he was to know what we were doing.

For me, it was so great catching up with my first mentor. He left today to go minister in West Malaysia. I thank God for what he left in my life, that his example shaped my understanding on how to serve God. This inspires me even more to help others along as I have been helped.
Posted by ben kc lee at 8:20 PM