New Year in 2007 started on a Monday. It was an early rise at 5:30 am to catch the flight at St Louis airport. In my haste not only did I miss breakfast but I also left my phone case in the hotel room. Next up was a very cold transit at the snow-covered Denver airport, my first time here. I arrived in LAX after Cynthia and Judy. Derek (from Hope LA) and Chris (who just moved here from Dallas) was on hand to welcome us. We had Cambodian food before I checked into a neat hotel that Cynthia had booked. Sleepily I started on Urbana follow up work. Before long Chai came over and we went out for dinner. The rest of the night was just packing and updating my blog. I started missing the Urbana team.

In the morning Derek & Cynthia arrived to take me to LAX. Cynthia was there when my family first arrived, there when my wife & kids left and was here now. She's so sweet. Saying goodbye, I thought, "I'm really going to miss the Hope LA people".

My Wed was spent crossing time zones. On the Tokyo to Singapore leg, I was seated in front of a family of four. The younger child cried and kicked my seat intermittently. It was sure hard to sleep but it must have even harder for the parents.

After the transit and flying for what seemed like ages, I arrived in Singapore at 1:30 am Thursday. My dear wife was on hand to welcome me. (To think that she had to get up again later to send the twins to morning school.) Without complaint she drove us straight to Punggol. It sure felt strange to step into our flat after 6 weeks away.

Eventually I got up and did my laundry. I tried to clear e-mails but I couldn't send because I've exceeded my server space. Then I drove, on the right side, to fetch the kids for lunch. After a haircut, we were meant to swim and I haven't swam for 6 weeks. But the evening rain got very heavy. At least it wasn't like the biting St Louis winter. Dinner was that long awaited taste of curry. Then was that familiar humidity followed by that familiar jetlag. Think I managed 5 hours of sleep.

On Fri morn I mistakenly turned into oncoming traffic before quickly reversing. We dropped the twins off at school. On the way the car felt like it lacked power. Then I realised that I'd been driving a 2.2 litre car for 5 weeks and here was a 1.6 litre car. Also the California freeway speed limit was 105 km/h but here the limit at home is 90 km/h. Today was also my first day in office after 6 weeks. It was so good to see the staff team. But there were tonnes of follow up matters even as I tried to finalise this weekend's sermon. Later we did manage to swim but in cold water. That night I managed 6 hours of sleep before my system 'awakened'.
Posted by ben kc lee at 9:26 PM 7 comments: 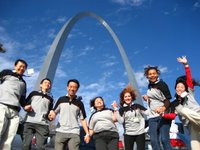 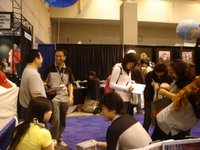 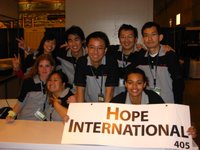 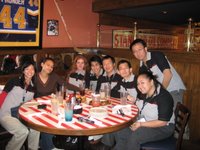 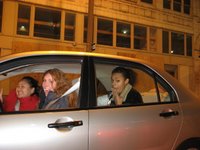 Sunday is the last day of convention. We have breakfast together. We take photos at the arc by the waterfront. 93 students leave their contacts with us. Its 6:30 pm and we tear down the booth and pack supplies into cars. We celebrate with dinner at TGIF. We bring stuff to our room for final debrief. We debrief to 2 am but watch the Times Square countdown on TV. I haven't seen TV and read newspapers for weeks.
We distribute what is left of 12 luggages of stuff, talk about Urbana 09 then check out. We sleep at 3:30 am
Posted by ben kc lee at 2:50 PM No comments: 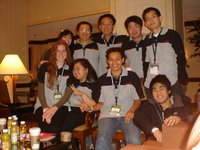 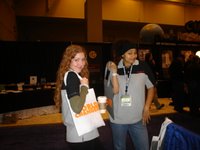 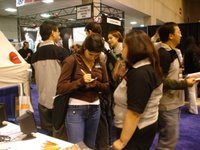 Sat is the third day. We have brunch planning session. JR needs to go back to Seattle first as we go to the booth. More walk up to our booth today. The additional signs about "churchplanting thru tentmaking" and listing of NA churches is working. Being the only organisation registered from Singapore helps too. We have dinner at the America Center and join the night session. Rick Warren spoke.
Posted by ben kc lee at 2:07 PM No comments: 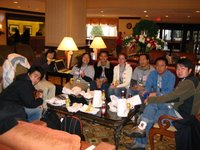 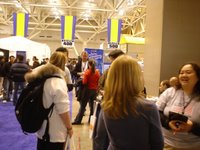 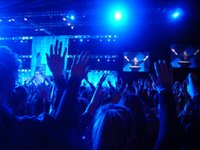 Fri is the second day. We approach more students. Some ladies come to our booth to get the grey bag. I lead a seminar with Dave Tucker on next steps after short-term missions. I have corn soy porridge dinner with 3 students from Seattle Pacific University. Later I join our team at the night session. Ray Bakke is impacting. Bono gives a video greeting. Cross movement does a concert. At 11 pm, we have dinner and debrief at Denny's. 54 students leave their contacts.
Posted by ben kc lee at 1:26 PM No comments: 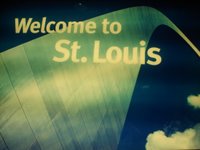 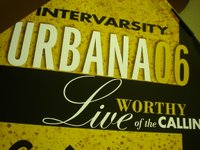 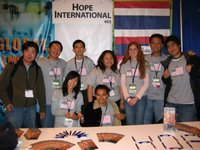 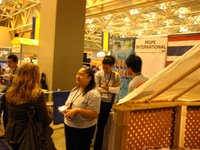 Thursday is the first day of the exhibition. We are a little excited yet nervous as first time exhibitors. The booth doors open at 1 pm. We approach scores of students browsing. Its energising. At 6:30 pm there is an announcement that the exhibition time extend by 30 minutes. So we miss dinner at convention. At the end almost 50 students give us their particulars. We go eat out and its cold and places here close early. We take the metro back.
Posted by ben kc lee at 12:46 PM No comments: