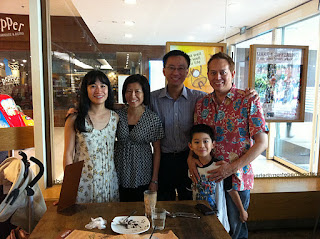 months. There were so much preparation for the new business year and the new ministry year. January is always fun when we get to celebrate two different New Years. The down side is the lack of monsoon rains this time of the year. Jan does not feel as cool as this time last year.

The highlights fall on the first 5 days, the last 5 days of January and involve Australia. The first day of 2012 was very special. Dinah and I caught up with my dear friend Lloyd and family here from Australia. But Dinah was occupied for the charity premiere of the movie Courageous on the second day of the new year. Then the HIM Global Conference was very early in Jan this year. Yes, this involved flying to Chiang Mai on the fifth day of the year.

Five days from end of Jan 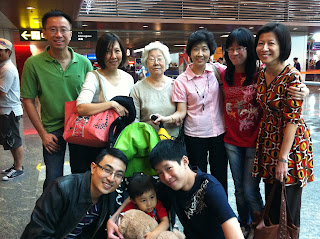 was the departure of Lawrence, Pat and Jono. Charmaine organised a meaningful farewell on the second day of Lunar New Year. Two days later, our dear friends returned to Australia. On the day, Richard and I helped with the final clear-up in Sengkang and drove the family with all their luggage to the airport. I do miss this special family very much!
Posted by ben kc lee at 9:58 PM No comments: