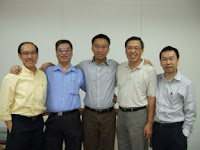 It started in 2002 when several pastors including me were at a lunch briefing for the first Fire Conference with Reinhard Bonke in March '03. Among others I met Vincent Lun of RiverLife church. He asked if I had pastor friends who would be keen to get together. I thought of Boon Hup of Paya Lebar Methodist and Henry Tan of Full Gospel Assembly. I asked them. They both agreed. So the four of us had our first pastors' breakfast at Upper Serangoon.

Since that session in Oct '02 (I think), we got together every 2 months. We take turns to host breakfast. In 2004, Vincent asked if he could bring Melvyn Mak, Faith Community Baptist Church. He also said let's call this "a circle of friends". In Jul 07, Melvyn got Danny Han, Victory Family Centre to join. He's the newest buddy.

What keeps us together for 5 years & counting? 2 are in their mid 50s, 2 in early 50s, 1 in late 40s & I'm almost 40. Well, we've become buddies. It was Melvyn who first started calling us "buddies". Besides breakfast we call & talk on the phone. Dinah has met Jenny (Vincent's wife), Pansy (Henry's wife), Catherine (Boon Hup's wife) & Linda (Melvyn's wife) at various events. Hope to meet Danny's wife soon. Second, there is commonality as senior pastors. We are peers. Well Melvyn is Deputy SP of a very large church, Henry has since moved to become an itinerant & Boon Hup is now at TRAC (like a denominational office) but we still love them. Third, we often share ideas & tips. Several of us have ministered at each other's churches.

There are many positives. I joined Melvyn to minister in the prisons. That was a first for both of us. Once Henry took me for lunch at this awesome duck place. He knows his food. There was 1 evening when Vincent called. He said he's got durians & if I could come collect some. It happens that Dinah, the twins & I were nearby so we swung by to his place. It was our first time there. That night Lawrence & Jeff got blessed as we dropped some off at their place on the way home. Indeed, the blessing overflows.
Posted by ben kc lee at 9:16 PM 3 comments: 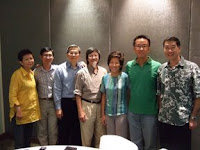 This is the 10th anniversary of a unique group of friends. Here's how it started. In 1997, Dinah signed up for a 10-week course on marital counselling at the Counseling & Care Centre. When the course ended, a course mate Swee Tin organised a breakfast at her place. 8 course participants & Anthony (instructor) came. The breakfast continued every 3 months. It's been 10 years now.
I would drop Dinah off for these get-togethers. Dinah introduced me to Paul from Geylang Church of Christ. I met the whole group with their spouses at Swee Tin's daughter's wedding.

In 1999, Kevin & Siew Choo from the circle relocated overseas for his theological studies. They are now Brethren missionaries in the US. In 2000, Dinah asked if I was keen to join . I said "yes". The group agreed. Sometimes Anthony reminds me that I'm adopted.

What sustains the group for 10 years? One reason is that we have become friends. We get together in smaller groups in-between the quarterly breakfasts. Another reason is candid discussion over current issues. There hasn't always been agreement but we continue to dialogue & sharpen each other. A third reason is that we're quite different. In a strange way we're fascinated by what the rest are doing or thinking. 2 are heavily involved in counseling & therapy, 1 heavily in social work, 1 itinerant & 4 in church work. 2 are in their early 60s one being a grandparent, 4 in their early 50s whilst Dinah & I are just under 40.

It's going to be interesting to see how this bunch of friends will develop as we walk through transitions in the seasons of life.
Posted by ben kc lee at 9:45 PM 1 comment: