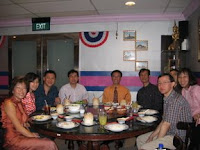 Sep 15th was the day of our church anniversary celebrations. In fact Dinah and I just came back from sending our guest speaker Pastor PN to the airport. There we met Yean Shien and Mabel who just sent Vivien off. Even in the airport, our hearts are still filled with thanksgiving from yesterday's celebration. Here's a photo from SiewQin taken in between the 2 anniversary services.

Here are memories and thanksgiving (all mixed up together). The anniversary logo is eye-catching, bright and contemporary. Our celebration itself was at the d'Marquee @ Downtown East. Our first time at the place was the night before for rehearsal. It's nice but smaller than last year's. Overall this year's set up is less elaborate. For example we had to assemble 1,500 light bulbs last year.

The big day finally came on Saturday. We arrived in the morning for the final rehearsals. We were approached for makeovers almost immediately . The Image team did a good job on Deb and Dan's hair. They applied makeup on the twins especially on Deb, for which Dan was thankful. It took some persuasion why he even needed any stage makeup.

This is our first anniversary to feature a guest speaker and a guest worship team. Both came from Hope Bangkok. The passage Romans 4:16-18 chosen by Pastor PN was appropriate for the event. The Hope Bangkok lifted the worship atmosphere several notches.

The two young hosts almost steal the show with their welcome lines. The mime item was a good intro. Then the remix of "Psalm 78" song was so good and I liked the way we had short video testimonies and Snapshots of Hope incorporated in. It was a challenge to have our worship team lead and then transit to Hope Bangkok team but it went well. The tango item sure got a rapturous welcome. 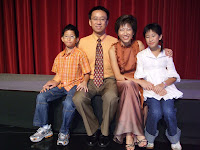 This year was special also because we served as a family. (Here's a photo sent in from Junming.) The twins hosted the starting segment of the service. And I only found out about this 2 weeks ago. Then Dinah and I did a short dance routine as part of hosting. It was our first time ever doing the tango. Thanks to Kin Wee for giving us two lessons and choreographing our routine.

This year we may have had close to 3,400 people celebrating. The second celebration service ended on a big high with us totally warmed up. This finale was absolutely rousing with stage ministers all excited. The Bangkok leaders enjoyed themselves in God too. Shirley led us in one more praise responding to the congregation. It was a wonderful close to 16 years of wonderful ministry. The celebrations continue today and tomorrow with our JUMP conference and concert. Happy Anniversary!
Posted by ben kc lee at 11:29 AM

Happy Anniversary Ps Ben! Wanna thank God for you & Dinah doing the dance coz' it really touched the hearts of the crowd! Of course, Dan & Deb were simply AWESOME!!!!!!! They must do it more. They looked soooo good :)

Thank God once again for you & the leadership team. Thank you for not giving up despite never-ending challenges. Thank You & Dinah for your love :) I'm so glad i'm in this family.

With you in Him,
Christine

Dear Ps Ben,
Thank you so much for sharing your lives with us and being such an encouragement to all of us!

We LURRRVE your tango number and you both look smashing in the matching outfits!! We love the twins too and really felt that they had done very well.
Thank God for your lives and for a wonderful anniversary!

It was great serving with you all..:)
Luv,
Rachel Tham

Hi Pastor Ben!
It's Jonathan from L.A. :]
WOW! That must've been a long and fun night for you guys! Hehehe! Just extending the excitement and love from across the Pacific Ocean!

P.S. WOW. First Pastors beat members in Soccer, now their entering Ballroom...what's there not to be amazed? :D

Yea thank you and Dinah for investing in the church :)

I'm so glad to be in Hope too!

i look at that family picture and makes me miss the kids soo much!!! Debra looks soo pretty!!! Tell them Auntie Cynthia says hi and misses them very much!!! Keep up the Good work pastor..will be praying for your family and the church out in Singapore!!

Dear Pastor Ben,
I really enjoyed seeing the family picture from the 16th anniversary. I got it store d on my desktop. I am so glad to know you and Dinah and miss you all. Thanks for being a great example as a leadership team and building a church that is mobilized and outward focused thru care groups and church planting. We love you all. God bless from Tor in Hope Norway.