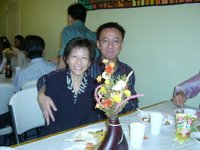 We've just spent a week in LA. We arrived last Saturday, 18th Nov. The night before the flight Dinah slept only 1 hour due to packing. I slept a lot thanks to medication. Altogether we had 6 check-in luggages. Dinah and I slept quite a bit on the plane.

Chai and Cynthia picked us up at LAX. We rented a car and went off together with Chai's car. I drove on the left side for the first time with Cynthia beside. We made it to Acardia (city). This is in greater LA (metropolitan LA). On the way we saw that LA smog. We checked in to the studio apartment and slept at 10 pm after unpacking and takeaway dinner.

Thanks for praying. The throat infection and blocked nose that started on Wed night was virtually gone when I got up. There was more Sun drama. We awoke to a choked toilet bowl and there was no maintenance guy on duty. We asked front office for another studio but they asked us to move then but we had to go. In the morn I preached my first ever Thanksgiving Sunday sermon. There was ham and turkey Thanksgiving lunch followed by the Care Leaders meeting. Next Dinah and I met the pastor and wife followed by church leaders meeting. The twins enjoyed their books during these times. At 7:30 pm we left for dinner with Sam and Sung before coming back to pack and move to another studio. Lee and Cynthia was so kind to come help. At 12am as we were about to sleep, the toilet bowl here also flooded. I used the pump and finally went to bed at 3 am.

The four of us woke up late on Mon. It was a combination of jetlag, the full Sunday and just general exhaustion. The first thing was to get the maintenance guy to fix the toilet. Cynthia offered to come help with grocery shopping and to rent a cello for Dan. At night we answered e-mails and had Skype conversations to tie up this weekend's LA Bible Conference.

Tuesday was our off day spent at Universal Studios. Just before we left, I realised the digicam was in Singapore. We got a use-and-throw camera. After all this was the twin's first time here. They wanted to go for themed rides (roller coaster) but Dinah and I said "Woah". We settled for shows and tours instead. We had a good time. Today we also experienced the infamous LA traffic.

On Wednesday we used the coin-operated washing machine and dryer. Our first appointment was with Betty. She showed us nearby shopping and dining places. We went to her place as she insisted to loan us her printer. After saying thanks we took the long drive to Irvine (city) to meet Albert, Doreen and family. Pre-holiday traffic isn't fun. People here sure spend a lot of time commuting. But we did get to taste a 25 pound turkey. The twins enjoyed playing with Al's younger kids. This was our first Thanksgiving experience.

Thursday was Thanksgiving. Chai and the boys visited in the morning with pastry. They are thoughtful. Then David called from Chicago and we had a good chat. Dinah and I spent this holiday afternoon preparing for the weekend Bible conference and preaching. Most places were closed. We found a place for a quiet dinner before meeting James and Christine. Cynthia offered to take the twins to check out Christmas lights. Like the last few nights, it took some time in bed before we actually slept. Our bodies are still adjusting.

I drove in circles on Friday before meeting Andrew. Then our next appointment with the college leaders was postponed. It worked out well as I revamp tonight's lesson. The twins were out with Cynthia for a movie. In the evening we joined all these folks who signed up for Bible Conference on Thanksgiving weekend. It was good to see Terry who's on transit to Singapore. Later on our way home, Daniel asked me why this church has so many meetings. Perhaps this has something to do with having Singapore guest speakers here?
Posted by ben kc lee at 9:38 PM

You're finally back in blogging. I'm from tertiary congregation and seldom have news about you, except through this blog! Thanks for serving God and His people even in other continents and foreign people. It may be tiring but I think it is also an awesome privilege for you!!

Dear Ps Ben,
thanks and good to hear from you through your blog still!

God's presence and power be with you.

Take care! (and your whole family)