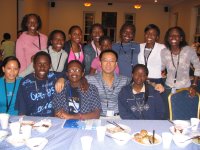 It's Tue the 11th Apr. We do errands, swim and pack. Our new modem arrives on Wed. Tonight our family has dinner at the airport. On the flight to Down Under, the Aussie couple next to me is surprised they have the exact wedding date as me.

We arrive in Brisbane at 7:30 am Thur. Wilson pick us up for breakfast at the motel and we are off for meetings. The Vietnamese dinner is good. Otherwise it's a sleepy affair for me. My room mate is Prackich. It's the first time we're room mates.

The convention starts Friday night and ends late. Then I conduct a workshop on Sat and later there is a Multicultural night where we don national costumes.

Easter Sunday is eventful. It starts with breakfast with 7 Singaporeans from Hope Sydney. Later it's lunch with Alan and Jessie. Alan and I were both from St Andrew's boarding house. Jessie is Albert's sister. Later it's dinner with 12 young Africans from Zimbabwe, Malawi and Ethiopia. Then I give a missions presentation at the convention.

After the Convention ends on Monday, we spend 2 hours at Sunshine Coast. Here I catch up with Peter Truong. He was in our church during 1996. Next we are at the pastors dinner at an Aussie steak house. Tonight I bunk in a ministry house. Lead Tao, Han, Pei Xiong are from Singapore. They are an interesting and inquisitive bunch.

Tuesday is breakfast with with Han, Pei Xiong, Ming Hang (from Indonesia) and Sunny (from Macao). Later Ming Hang gives me a lift to the airport. It's good to get an empty row on the flight but it's a day flight. It's great to see Dinah and the twins at the airport.

Wed is when I finalise the leadership lesson. At night I teach 'Spearheading A Spiritual Revolution'. Thur is time at the lawyer's office. Fri is just tonnes of follow up matters. It rains on Fri so there is no swimming.

Sat is interesting. I call for taxi and the automated voice says one will arrive in 15-18 min. Normally it's 5-8 min. So I try to hail a taxi to no avail. The booked taxi arrives in 10 min. But the taxi driver takes a wrong turn. When we do get on the highway, it's congested. I'm praying I won't be late. We finally arrive and I do not ask for discount on the fare. He discounts $1 and I responded by asking him to keep the change. I go right in to preach at our student services.

The next day sees two more sermons on the greatest secret ever revealed to the minds of human beings. I have been touched by developing this message. Later we manage to swim in the evening. I haven't moved in the water for a long time.
Posted by ben kc lee at 8:22 PM