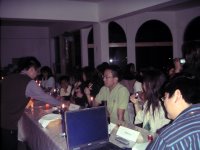 It's Saturday and we get ready for camp. I chat with Felix before we load equipment into the taxi. Then four of us collect the cake and get some groceries in Julian's car. This is a 30 year old Volkswagen. We drive over an hour through a wealthy district and hilly/dry district. The double exhaust pipe has explosion-type sounds. We finally arrive at noon. The Christian camp site in Cieneguilla is located between the coast and highlands. It's a desert-like terrain with dust. Afternoon is set up time. I become quiet before God reading Ephesians.

Later Terry translates for me as I greet campers. The Latinos are affectionate and warm towards foreigners. I meet Cecilia who came to know Christ in our Singapore church. She reminds me that I baptised her in Singapore and challenged her and German to return to Peru instead of migrating to Canada.

Night comes and the children and then the youth present special items. This starts the second anniversary-camp. Serene leads in praise and worship. Julian leads in the Passover Dinner. This is a unique anniversary celebration. Then I share a few words. After dinner we adjourn to the campfire. The evening ends and we rearrange the hall for the next day.

The Sunday dawn is broken early by the sounds of roosters and turkeys. It's good to have devotions with the scenic hills in the background. Terry and Lidia leads the morning exercises and at one point Terry almost falls over. He just makes everyone laugh with his antics and Spanish.

Breakfast is Tamar, corn with beef filling. Coffee here is light as Peruvians don't drink much coffee. We have great conversations. Felix leads morning worship. Then I do a workshop with adults, youth have a workshop and kids have their activity.

In the free time Edgar invites me to spend time with his family. His mom is Benedicta, a fascinating Christian from the highlands. His wife is Nancy. His sisters are Ester and Lidia. Benedicta sings Highland Christian songs for us. The highland melody is so unique.

Lunch starts with a potato appetiser (with highlands origin) and Peruvian chicken rice i.e. rice cooked in spinach with a piece of chicken. Over lunch I get to speak with Daniel and Felix. Later I reply to my wife who is in Santiago.

It's water baptism. Laura and Vanessa share their conversion testimonies. Then Julian, Serene and team lay hands on them. Then Julian and I baptise six people in the pool after praying prophetically for them. After the shower Terry invites me to pray for the church before we cut the 2nd anniversary cake.

Later it's great to catch up with German. We prayed for him to be baptised in the Spirit in Singapore. Soon it's time to pack up and take group photos. I am so glad to witness what God is doing in this country.

Then we say long good byes. I have never 'kissed' so many ladies before. Many members hold my hand and speak to me endearments in Spanish.

It's time to drive back in Julian's volkswagen. We unload the stuff and I do laundry for the wet clothes. We order in pizza. It's time for our last supper. It's heart warming as we encourage each other and thank each other. It's sad that I have to leave tomorrow.
Posted by ben kc lee at 10:59 PM

Wow... thank God for your sharing, Ps Ben! :D It's very heart-warming... really excited to hear what's going on on the other side of the world! :D

Really very inspired by these bros n sisters... really hope can go on a missions trip one day... :D

yeu@nn, glad that our visits to mission points excite you. yes i'm inspired by our teams on the field. and yes i also hope you will go a trip soon.