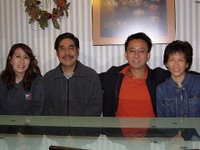 Sat was LA church leaders retreat. It was a day of dicussions on 2007 ministry. It was quite fun. Before we left, Jason and Emmy gave us home cooked food. Back at the studio we enjoyed their delicious cooking. Later William called from Vancouver. The rest of the evening was spent preparing for tomorrow.

Dinah led the Sunday service well before I preached. Next Dinah conducted a workshop for couples as I met with the kids ministry leaders. Suddenly Dan came running with a bleeding nose and we had forgotten to bring his nasal medication from Singapore. Thankfully the bleeding stopped after a while. Following was a session with Chai and Crystal before the church leadership meeting. We came out at 8:30 pm and Crystal has a warm dinner dinner prepared. So we ate together before leaving.

Mon started with Dan unwell. We prayed for him and decided to spend time at the nearby Knotts Berry Farm rather than going to San Diego.

Dan's temperature got higher on Tue. We had to cancel our appointment with a senior pastor of a local church here. We drove out to get porridge. Later Chris Ward called from Seattle. At night the kids joined Dinah as she taught the women's group while I taught the men's group.

Dan was better on Wed but I got a sore throat. The day started with a conference call with Peter and Linda from Leithbridge, Canada. Then JR called from Seattle as the twins enjoyed a DVD movie. At night we spent time with Hadi and Maria at their place till late.

We were meant to leave LA on Thur. Our leaders have asked us to extend. First Lee accompanied us to extend the car rental. The journey took 1 hour. The new company offered the exact same car - Chevy Malibu. We had lunch afterwards. After lunch the short journey back took a whole hour. We were exhausted but needed to go to care group in North Hills. On the way the GPS insisted we take a ramp onto a highway that was closed. It kept making us turn back to the same ramp. This 90 min journey made us very late. Eleven persons waited for us (if you don't count a bunch of toddlers and infants).

We had Friday to ourselves because Nancy couldn't make it. We drove out and had Carl's Junior burgers for the first time. Later we spent time with Jason and Emmy. We're beginning to feel that we're more oriented after 4 weeks here.
Posted by ben kc lee at 11:34 PM